New York City Center is back with a full season of the popular series you have loved throughout the years and new programs featuring iconic artists of today.

Take your seat for the 2021 – 2022 season of vibrant dance and musical theater presentations and enjoy the thrill of in-person live performances you can only see on our stage.

Buy with confidence. Our latest health, safety, and ticket policies ensure you know how well we’re preparing to welcome you back and what is expected upon your arrival.

For this momentous return to in-person live performances, City Center will operate a fully vaccinated venue. Approved masks must be worn by all audience members, staff, and crew.

Welcoming an audience of newcomers and seasoned enthusiasts to experience an eclectic mix of choreographers and performers since 2004, Fall for Dance is a highlight of the fall dance season in New York City and accessible to everyone with all tickets $15. This year’s line-up consists of five programs each featuring three different groups of artists and companies—and City Center commissions by tap dance superstar Ayodele Casel, modern dance legend Lar Lubovitch, The Verdon Fosse Legacy reconstruction of a trio of dances originally created for Tony Award-winning actor and dancer Gwen Verdon, and a co-commission with Vail Dance Festival by sought-after choreographer Justin Peck. Learn more. A 10-year-old boy from an upper-middle-class Black family dreams of becoming a professional tap dancer. Director Kenny Leon leads this revival, bringing a fresh take to the production with new tap sequences by choreographer Jared Grimes and a concert adaptation by Lydia Diamond, reminding us of the power of family and dance as a force of healing. Artists at the Center is our new dance series that gives City Center’s extraordinary family of artists opportunities to conceive and curate their own programs for our stage. Tiler Peck, New York City Ballet principal dancer, will launch this annual event with a program of her design, performing alongside a variety of dancers and musicians. A City Center-commissioned world premiere is presented alongside works by William Forsythe, Alonzo King, Jennifer Weber, and Peck herself. This story of the complex lives in post-disco Times Square centers around Queen, a prostitute who strives for a better life against all oppressive forces. Billy Porter reclaims this musical as director and adaptor to bring forth the gritty, dangerous, and exciting decadence of New York City in the 1980s. The inaugural program for City Center's new annual spring dance festival showcases New York companies making their triumphant return to the City Center stage after more than a year away: Ballet Hispánico, Dance Theatre of Harlem, Martha Graham Dance Company, and Paul Taylor Dance Company. The Festival continues to grow an audience of dance lovers with accessible tickets available through our Access City Center Club which provides exclusive ticket offers for anyone 35 and under.

Music and lyrics by Stephen Sondheim
Book by James Lapine

Directed by Encores! Artistic Director Lear deBessonet, this production ushers in a new annual tradition that brings together Broadway’s brightest stars with a multi-generational group including New York City public school students, to celebrate an iconic American musical and inspire all New Yorkers to find their own way into the work.

May 4
6pm performance, followed by dinner at The Plaza Hotel

Join us for a Gala celebration to honor New York City Center President and CEO Arlene Shuler's 19 years of extraordinary service. Funds raised at the Spring Gala allow City Center to build upon Arlene’s legacy of artistic excellence while upholding our founding mission to provide access to the best in the performing arts for all New Yorkers. This series of conversations and performances is an opportunity to hear from today’s great dance artists in the intimate setting of our historic studios. Events feature artists from our mainstage programs—Alvin Ailey American Dance Theater, Artists at the Center | Tiler Peck, Fall for Dance Festival, and more. A special program with Dance Lab New York focuses on female ballet choreographers of color. 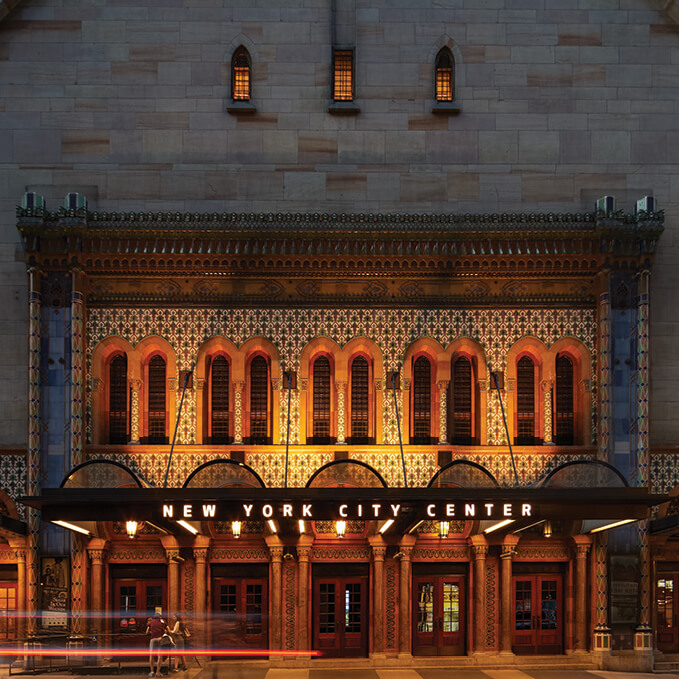 As we look to the rest of this season and beyond, we hope you’ll consider making a gift to ensure that we continue to bring the joy of live performance to you and your family for generations to come.

MAJOR SUPPORT FOR NEW YORK CITY CENTER IS PROVIDED BY

ADDITIONAL SUPPORT FOR ARTISTS AT THE CENTER IS PROVIDED BY
Denise R. Sobel
We are grateful to the Charina Endowment Fund for its early support of this initiative.

SUPPORT FOR THE ARTS ACCESS FUND IS PROVIDED BY

Each year, City Center’s Fall for Dance Festival presents some of the world’s most extraordinary dancers and companies for less than the price of a movie ticket. But we can’t do it without you! Please consider making a gift today to help us welcome a new generation of dance lovers and ensure this beloved festival remains affordable for all New Yorkers.