Anyone who has seen Natalia Osipova perform knows that her dancing stands alone. She’s been called many things: a powerhouse, a superstar, a sensation, a phenomenon. None of these fully capture her singular bravura or striking originality but they get the point across.

For an artist known for her individuality, it’s surprising to consider how many famous pairs she’s been part of since beginning her career at the Bolshoi Ballet in 2004. First was her partnership with Ivan Vasiliev, with whom she made her big break in 2007 on a tour of Don Quixote with the Bolshoi. (She also appeared on a New York City Center program with Vasiliev in 2015.) Then was the partnership with Sergei Polunin, Ukrainian dancer and “bad boy” of ballet, with whom she shared a City Center program in 2016.

But her most celebrated and intimate partnership has been her onstage relationship with American Ballet Theatre principal dancer David Hallberg—with whom Osipova has danced at ABT, The Royal Ballet, and the Bolshoi for ten years now. Hallberg has proven a steady, refined counterpoint to Osipova’s explosive boldness. The pair will reunite during Osipova’sPure Danceprogram at City Center April 3 – 6, dancing the pas de deux from Antony Tudor’s The Leaves Are Fading and Valse Triste, by Alexei Ratmansky, ABT’s Artist in Residence.

Osipova’s relationship to Ratmansky is also rather storied. During his time as artistic director of the Bolshoi, he hired her into the corps de ballet and cast her in several career-making roles. “Nothing has changed,” since their early days working together, says Osipova. “He has helped my career so much. I am so thankful to still be working with him.” And though Osipova, Hallberg, and Ratmansky have worked extensively with one another in pairs, the three artists had not been involved in a creative process together before creating Valse Triste—in fact no one had ever made a work on Osipova and Hallberg before. 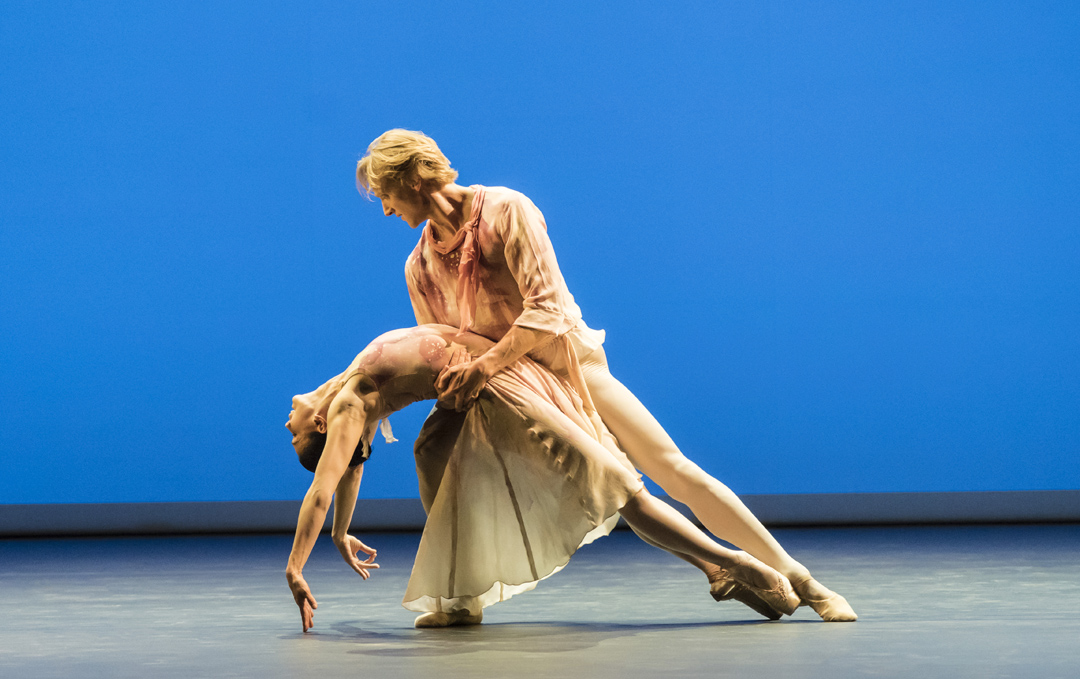 Natalia Osipova and David Hallberg in The Leaves are Fading; Courtesy of Sadler’s Wells; Photo by Johan Persson

The process—which took place last summer in New York City—was marked by the exacting work ethic of all three artists, and by laughter, says Osipova, which was their reaction when Ratmansky would ask for one last run at the end of a five-hour rehearsal. It’s a special partnership where laughter is the default. For Osipova and Hallberg, this easygoing attitude seems to stem from both the comfortable familiarity they’ve cultivated over ten years of partnership, and the sense that now, when there are often many months and miles between, when they’re able to dance together every moment in the studio together is precious. But it’s also the respect—reverence even—that the two dancers have for Ratmansky and his work. “He always knows what he wants,” says Osipova.

“He doesn’t move on unless he knows. He will work two hours on one part because he wants it to be clear.”  It was inevitable that Valse Triste, which is a co-production of City Center and Sadler’s Wells, would plumb new depth in Osipova and Hallberg’s partnership. It was tailor-made for them, after all, and by a choreographer known for making discoveries about his dancer’s abilities and artistry as he works. But at just over six minutes in length, it’s a compact vehicle for the duo, who are known for their expansive portrayals of Giselle and Albrecht or Romeo and Juliet.

Much like these roles, though, Valse Triste, which is set to Sibelius, explores a relationship that ebbs and flows between the melancholy and the playful; between desire and loss. Or, as Osipova puts it: “It’s happy but not happy. It’s romantic but not romantic.” And though they’ll have less time to scale these highs and lows than they would while dancing a full-length ballet, the piece’s brevity gives their fraught relationship a sense of urgency.

Osipova will also dance three hand-picked contemporary works: Ave Maria a solo by Yuka Oishi, Israeli choreographer Roy Assaf’s mysterious Six Years Later with Jason Kittelberger (with whom she shared the stage during her last engagement at City Center in 2016, in a work by Eastman director Sidi Larbi Cherkaoui), and the US premiere of Spanish choreographer Iván Pérez’s Flutter with contemporary dancer Jonathan Goddard, which was created for the pair. “It’s fantastic because you switch between so many different feelings,” she says of the program. “But physically I feel empty afterwards. By the end I don’t know how I did it.”